After eating generic and less-than-fresh fruits and veggies, running across a "real" one can turn out to be quite the experience. It seems hard to believe that the difference will be quite noticeable to the untrained pallate. Well, let me tell you...it's quite obvious. On Mondays, the Cal Poly Organic Farm's Community Supported Agriculture (CSA) program drops off a box overflowing with fruits and vegetables on the Central Coast Vineyard Team's doorstep. They provide a crate with seasonal, locally-grown, and interesting produce. Cal Poly merges its personally grown produce with that of local farmers in order to provide a... [Read more...]

To the Market and Kitchen – Wish Me Luck

After publicly admitting my food sins, I knew that I couldn't change my course alone (if I could, it would have changed about 20 years ago). To combat my "lonely chore" perception of cooking, I asked for company from my sister and nephew. And to address my "I don't know what the heck to do in the kitchen" barrier, Michelle Ward of Seasonal Custom Cuisine quickly came to my rescue with some recipes and guidance (thanks for the tips on how to cut corn off a cob - that could have been ugly and dangerous left to... [Read more...]

Can You Order Me a Pizza and Put it on Your Tab?

No joke. That was a text from my teenage son, who was home alone while I was on a business trip to SF. This is both hysterical and disturbing on many levels: He actually thought I had a tab with the pizza company. Either it didn’t occur to him, he didn’t want to, or he didn’t know how to prepare something to eat. Read More >> [Read more...]

Was That the Winemaker on Bass?

I thought I knew the D’Anbino Vineyards & Cellars folks. But my “aha” moment happened when my family’s three generations enjoyed the party at their Paso Robles tasting room – complete with a comedy act (long time friend Tony Russell who also handled some lead singing), fabulous cabs and syrahs, and a special appearance by the D’Anbino Family Band. Carmine Rubino (half the name sake of D’Anbino) played bass and doubles as the winemaker. John Andrea (other half of the D’Anbino namesake) played a fab sax and puts his creative carpentry skills into place for... [Read more...] 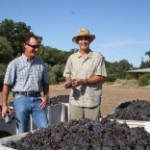 Niels Udsen Castoro Cellars Paso Robles, San Luis Obispo County Niels Udsen, known as “beaver” in his youth, has been committed to progressive farming practices since 1994. His Westside Paso Robles vineyards are certified organic or transitional. He chose to certify his eastside Paso Robles vineyards as sustainable to compare the two farming methods. He and his wife live in and around their vineyards, so they are directly impacted by the daily vineyard operations. If you can’t find Niels in the vineyard, you’ll probably find him surfing, skiing, or hiking somewhere fabulous. [Read more...]